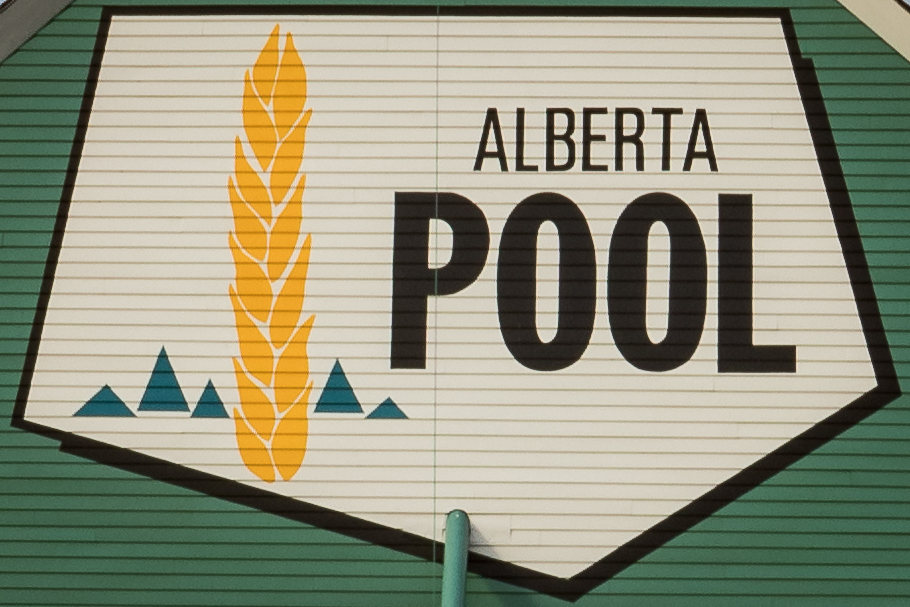 The Alberta Wheat Pool was a co-operative farmer’s organization dedicated to marketing the wheat produced by its members. It began operations on October 29, 1923 as the Alberta Co-operative Wheat Producers Limited.

The Pool was formed to aid farmers by selling their grain at a competitive rate without wild price fluctuations. Previously, farmers were at the mercy of the line elevators and the Winnipeg Grain Exchange’s rates, which could vary wildly.

Farmers signed up to send their grain to the Pool to store and sell when they thought best. Initially the Pool’s grain was received by the grain elevators of the United Grain Growers Grain Co. (later UGG) and the Alberta Pacific Elevator Company.

Farmers were paid for their grain in up to three payments:

John Martin, a farmer east of Calgary, was the first farmer to deliver wheat to the Pool.

The Pool instituted a 2 cent/bushel deduction starting in the 1924-25 season to finance grain elevator construction. The first three grain elevators built for the Alberta Wheat Pool were Leo, Esther and Sedalia.

The Pool started constructing a terminal elevator in Vancouver, BC in late 1927. The 2,000,000 bushel capacity Alberta Pool Terminal No. 1 was finished in the fall of 1928 and the first ship (Cragpool) loaded on October 9th, 1928. The Alberta Wheat Pool leased a government elevator as No. 2.

In 2001, Agricore merged with UGG to become Agricore United, a publicly traded company.

Agricore United was acquired by the Saskatchewan Wheat Pool in 2007 to become Viterra.

Together, our mission is to competitively produce, process and aggressively market diverse, world class agricultural products, and to respond to the changing demands of our customers and our environment with integrity so we share in an enhanced social and economic future.

Much of the information from this page came from the excellent book Tides in the West by Leonard D. Nesbitt. This is a very detailed look at the beginnings of the Alberta Wheat Pool, up to 1961. This link is an affiliate link, meaning that I receive a small commission if you buy something using the link, at no extra cost to you.

Back to Grain Elevator Companies