Amazon links on this site are affiliate links, meaning that I earn a small commission if you purchase something using those links.

The stars of the book are the grain elevators, evocatively photographed in all seasons in night and day. The photographs are large and colourful and are all captioned with details about the elevators and/or the area.

I must disclose that I was the copy editor for this book – and I was paid for it – so I am quite familiar with the book’s contents and I am definitely biased in its favour. It was a pleasure to work with Christine, Chris and Vernon from publisher MacIntyre-Purcell on this book.

You can view the virtual book launch below.

The book includes numerous sidebars describing aspects of grain elevators and the people and companies who built them. It is not “just a picture book”!

This book has been produced to the same level of quality as Chris’ previous book, Forgotten Saskatchewan, which was a best seller in its class on Amazon.

If you like grain elevators, you should get this book. It’s available from McNally Robinson and from Amazon (below).

Buy the book on Amazon.ca

The book “The Rise and Fall of United Grain Growers” by Paul D. Earl is exactly that – the story of the formation of UGG and its climb to greatness, through its decline in the 1970s and 1980s until it was acquired by the Saskatchewan Wheat Pool and became Viterra.

There haven’t been many books written about United Grain Growers (UGG). There’s The First Fifty Years by R.D. Colquette and A Farmer’s Company Comes of Age issued by UGG itself. Both cover the rise of UGG but were written decades before the end of UGG. Both were also quite sympathetic toward the company.

Some links in this post are affiliate links, meaning I earn a small commission if you buy something using the link, at no additional cost to you.

Author Paul Earl’s book is more objective than the two books mentioned above, and is certainly more critical of the end of UGG than any company-commissioned book would be. One almost gets the feeling that the author was personally offended by the way UGG was taken over by the Saskatchewan Wheat Pool.

“Rise and Fall” provides a great introduction to UGG and the forces at play that caused a small group of farmers to form the Grain Growers Grain Cooperative, which became UGG, and indeed started the farmer’s cooperative movement in western Canada.

The book goes on to describe each of the presidents of UGG in turn, and what happened at the Company during their respective tenures as president. Some served longer than others, but most had a significant impact on the company and helped it to prosper in its first 40 or 50 years of life.

The Canadian grain industry stagnated in the 1970s and 1980s, mostly due to the Crow Rate and the disincentive to improve grain facilities because of it. The railways had no incentive to improve grain handling, as they were already losing money shipping grain. Service degraded, farmers and elevator companies suffered, and no capital was available to improve facilities and make them more efficient. Outwardly UGG seemed okay but its financial information showed that it became less profitable and took on more debt.

A significant amount of the book is dedicated to these mergers, and the eventual fight between the Saskatchewan Wheat Pool and James Richardson International to acquire UGG and the rest of Agricore United. The author looks at that effort in detail, and tries to understand why the board made the decisions it did.

I really enjoyed the book, particularly the first two thirds where the history of UGG was discussed in detail. The last third of the book went a little too deep into the mergers and acquisitions for my taste. It is good that this is documented in such detail for future reference.

I learned a lot from this book and I encourage Canadian grain elevator fans to acquire a copy. I purchased mine at McNally Robinson but you can also purchase it on Amazon or on AbeBooks.

The book “The Great Grain Elevator Incident” is a young adult novel by Kevin Miller, book 4 of a series set in the fictional town of Milligan Creek. This book is not specifically about grain elevators but they are prominently featured throughout the book.

The book follows four boys as they “concoct a wild scheme to save their grain elevators”. It follows a familiar real-life theme of a grain elevator company planning to build a large concrete grain terminal outside of town that will make the town’s historic elevators obsolete.

I received this book from the author as a review copy. I enjoyed reading the book and finished it in a couple of hours. The book reads well and the story moves right along, with a few interesting turns that I did not expect. It is not necessary to read the first three books in the series.

The cover illustration was made by Kierston Vande Krats.

The book reminded me in some ways of the well-known Encyclopedia Brown series, with a group of friends working to solve a problem.

I’d recommend this book to anyone with kids in the 8-12 year range, or even for older children or those of us who are “young at heart”.

Buy this book on Amazon

As an Amazon Associate I earn from qualifying purchases. This means that I earn a small commission when you purchase something from Amazon using my links, at no additional cost to you. I was supplied a review copy at no cost, with no promise for a positive review. 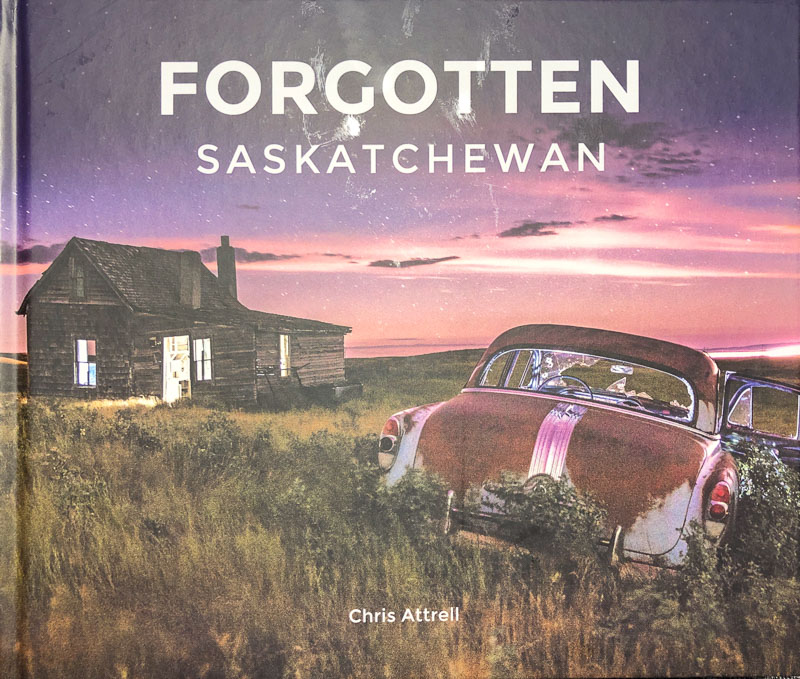 I have been looking forward to Forgotten Saskatchewan for a while now. I’ve followed author Chris Attrell‘s work for some time on his web site, and in fact he used to own grainelevators.ca before I bought it from him. I’ve admired his spectacular photos of abandoned buildings and I expected his book would be great. It didn’t disappoint.

This book is really a love letter to Saskatchewan, a tribute to the decaying beauty in its disappearing small towns.

The book was published by MacIntyre Purcell and the print quality is excellent. If I ever write a photo book, I would strongly consider this publisher. Each page features a beautiful full colour image with a descriptive caption.

Some of the photos were clearly taken from a drone, giving a unique perspective.

There are a number of grain elevators featured in this book, including Dankin, Bents and Neidpath.

If you’re here on this site, you would probably like Forgotten Saskatchewan. You can buy it on Amazon, through McNally Robinson or at Chapters/Indigo.

This post contains affiliate links, which pay me a small commission if you purchase something through the link, at no additional cost to you.

This is a review of the book “Gone But Not Forgotten: Tales of the Disappearing Grain Elevators” by Elizabeth McLachlan. The book is a collection of stories about grain elevators and the towns they are/were in.

The 28* stories cover all sorts of tales about grain elevators, from bringing grain to market through elevator fires and other mishaps, and include such titles as “Lead in Her Pants” and “Dam(n) Progress”. In general the stories are amusing, touching, and sometimes poignant.

* there are actually 29 stories; the last is Ms. McLachlan’s own story of being married to an elevator agent.

The book is illustrated by historical photos as well as some contributed by noted photographer Chris Stackhouse, including the stunning cover photo of the grain elevator on a farm near Woodhouse, Alberta.

You can buy the book on Amazon or your local bookstore, or maybe find it in your local library.