Jeff Whyte is a new contributor to Grain Elevators of Canada. He is a Calgary-based photographer and has shared photos of a few elevators so far – see his contributor page for links and a link to his Instagram profile – and we look forward to more contributions in the future.

If you want to become a contributor, please contact me!

Marilee Manz is a new contributor to Grain Elevators of Canada. She is a photographer in Alberta and comes from a family of farmers, so grain elevators are especially meaningful to her.

She has shared a few grain elevators so far and we look forward to more contributions in the future.

If you want to contribute photos, contact me at steve@traingeek.ca!

The book “The Rise and Fall of United Grain Growers” by Paul D. Earl is exactly that – the story of the formation of UGG and its climb to greatness, through its decline in the 1970s and 1980s until it was acquired by the Saskatchewan Wheat Pool and became Viterra.

There haven’t been many books written about United Grain Growers (UGG). There’s The First Fifty Years by R.D. Colquette and A Farmer’s Company Comes of Age issued by UGG itself. Both cover the rise of UGG but were written decades before the end of UGG. Both were also quite sympathetic toward the company.

Some links in this post are affiliate links, meaning I earn a small commission if you buy something using the link, at no additional cost to you.

Author Paul Earl’s book is more objective than the two books mentioned above, and is certainly more critical of the end of UGG than any company-commissioned book would be. One almost gets the feeling that the author was personally offended by the way UGG was taken over by the Saskatchewan Wheat Pool.

“Rise and Fall” provides a great introduction to UGG and the forces at play that caused a small group of farmers to form the Grain Growers Grain Cooperative, which became UGG, and indeed started the farmer’s cooperative movement in western Canada.

The book goes on to describe each of the presidents of UGG in turn, and what happened at the Company during their respective tenures as president. Some served longer than others, but most had a significant impact on the company and helped it to prosper in its first 40 or 50 years of life.

The Canadian grain industry stagnated in the 1970s and 1980s, mostly due to the Crow Rate and the disincentive to improve grain facilities because of it. The railways had no incentive to improve grain handling, as they were already losing money shipping grain. Service degraded, farmers and elevator companies suffered, and no capital was available to improve facilities and make them more efficient. Outwardly UGG seemed okay but its financial information showed that it became less profitable and took on more debt.

A significant amount of the book is dedicated to these mergers, and the eventual fight between the Saskatchewan Wheat Pool and James Richardson International to acquire UGG and the rest of Agricore United. The author looks at that effort in detail, and tries to understand why the board made the decisions it did.

I really enjoyed the book, particularly the first two thirds where the history of UGG was discussed in detail. The last third of the book went a little too deep into the mergers and acquisitions for my taste. It is good that this is documented in such detail for future reference.

I learned a lot from this book and I encourage Canadian grain elevator fans to acquire a copy. I purchased mine at McNally Robinson but you can also purchase it on Amazon or on AbeBooks.

Here’s a lovely song and video by Bieck O’Shea about the Oberon, Manitoba grain elevator. A couple of my still photos are in the early part of the video.

See more from Bieck-O’Shea. I earn a small commission from the Amazon links on this page.

I made my own video about Oberon, which is what prompted Sharon Bieck to contact me to provide some material for her video. 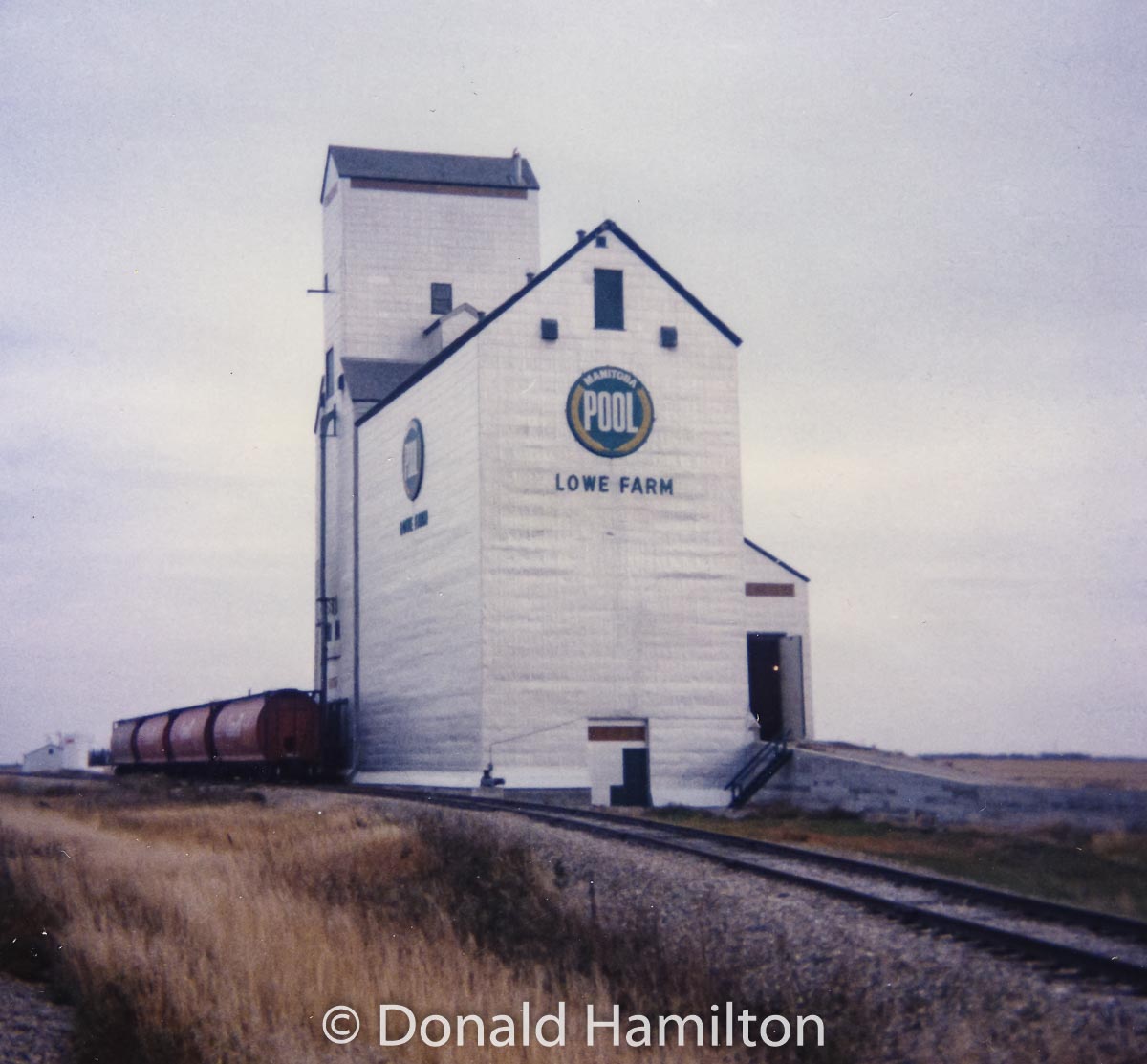 I was recently contacted by Greg Hamilton, the son of Donald Hamilton. Donald had taken many photographs of grain elevators in the late 1980s and early 1990s in his home province of Manitoba, and ventured into Saskatchewan and Alberta as well. Greg asked if I was interested in scanning those photos for use on this web site. Absolutely!

There are about 20 binders of photographs, organized by elevator company. I have scanned three binders to date and have started adding the photos to this site. In some cases Donald had photos of elevators that weren’t on this site – like Birdtail, Kelloe and Cracknell – and in other cases his photos are adding to existing elevator pages.

I expect it will be a long process to absorb this collection into the site, but Grain Elevators of Canada will be a better place for it and I am very grateful to Greg for allowing these photos to be scanned and shared. 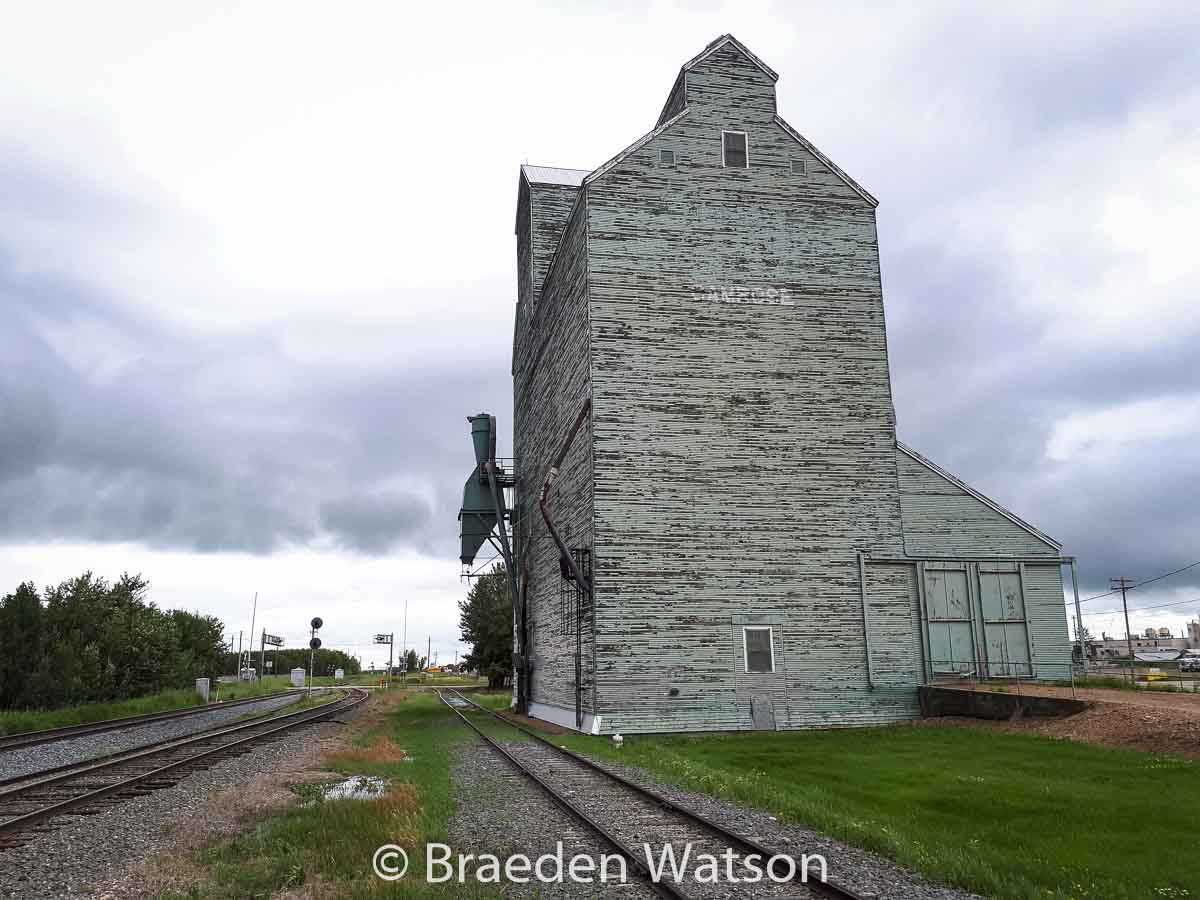 I want to give a warm welcome to Braeden Watson, who has joined the GEoC team with a large contribution of grain elevator photos. Braeden sent in a number of Alberta grain elevators that were not already on this site, including Dapp and Leduc among several others.

If you would like to contribute your grain elevator photos to be shared here, please contact me at steve@traingeek.ca.

Contributor Jason Paul Sailer has contributed a number of Saskatchewan grain elevator photos, including some elevators not featured here before! Thank you, Jason.

Some of the new/updated elevators: 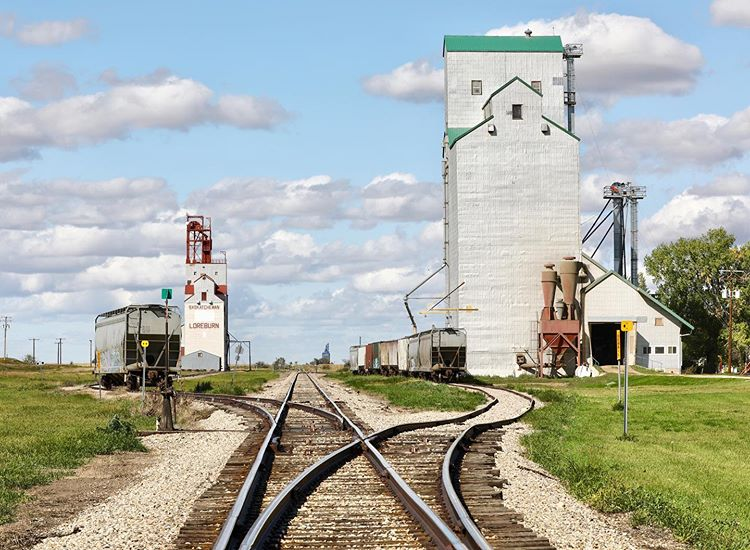 We have a new contributor at Grain Elevators of Canada, Robert Lundin!

You can visit his contributor page for a list of elevators he has contributed photos of.

The book “The Great Grain Elevator Incident” is a young adult novel by Kevin Miller, book 4 of a series set in the fictional town of Milligan Creek. This book is not specifically about grain elevators but they are prominently featured throughout the book.

The book follows four boys as they “concoct a wild scheme to save their grain elevators”. It follows a familiar real-life theme of a grain elevator company planning to build a large concrete grain terminal outside of town that will make the town’s historic elevators obsolete.

I received this book from the author as a review copy. I enjoyed reading the book and finished it in a couple of hours. The book reads well and the story moves right along, with a few interesting turns that I did not expect. It is not necessary to read the first three books in the series.

The cover illustration was made by Kierston Vande Krats.

The book reminded me in some ways of the well-known Encyclopedia Brown series, with a group of friends working to solve a problem.

I’d recommend this book to anyone with kids in the 8-12 year range, or even for older children or those of us who are “young at heart”.

Buy this book on Amazon

As an Amazon Associate I earn from qualifying purchases. This means that I earn a small commission when you purchase something from Amazon using my links, at no additional cost to you. I was supplied a review copy at no cost, with no promise for a positive review.

One elevator involved in the recent sale of Louis Dreyfus facilities to Parrish & Heimbecker is being challenged by the Canadian Competition Bureau. The Bureau says the former LD facility outside Virden, Manitoba and the P&H elevator in Moosomin, SK were “close competitors”, and this purchase eliminates that competition.

Because both elevators are now owned by the same company, the Bureau says that they will no longer compete to offer farmers the best prices for wheat and canola, and that will result in lower income for local farmers.

Looking at a map of grain elevators around Virden, one can see that farmers in the Virden area have few choices for online grain elevators. The closest non P&H elevators to Virden are Cargill in Oakner, Viterra in Souris, Richardson Pioneer in Kemnay, or Cargill in Elva 80 km south.

Farmers between Moosomin and Virden appear to have no real alternative other than to drive considerably farther to one of the other elevators.

The filed notice calls on P&H to sell one of the two elevators and to not acquire any elevator in the area for 10 years unless approved by the Competition Bureau.